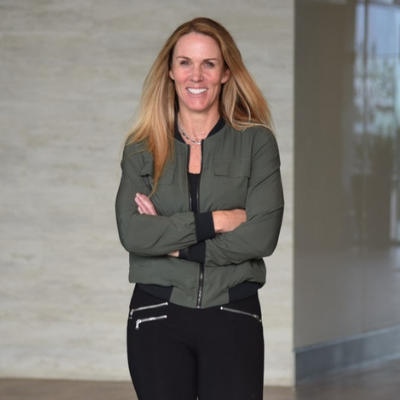 From attending University of Hawaii as a varsity cross country athlete, iron-man triathlete and swimmer to working at Gold’s Gym and 24 Hour Fitness, Lindsay Junk has always been competitive. After working her way up in the fitness industry, Lindsay found success at YogaWorks and eventually TruFusion. From there, Lindsay was introduced to Xponential Fitness and felt a connection with the energy of the boutique fitness world it was building. When Xponential acquired YogaSix, she was brought on as the company’s President. She ultimately wants YogaSix to become the nation’s largest yoga brand and help others find their purpose, strength and tribe.

[3:01] Lindsay considers herself to have been in the sports industry since she was six. She has been involved with several fitness businesses prior to joining Yoga Six.

[8:17] Lindsay’s husband Ryan previously joined Josh on Franchise Euphoria several months ago to discuss his franchise system, Cyclebar, which is also within the Xponential Fitness umbrella.

[9:48] When Lindsay joined Yoga Six, they had seven locations that were corporate entities.

[12:12] One of the advantages of being within Xponential Fitness is that they come into a newly-acquired franchise system with a proven “playbook” and apply it to their brand.

[16:02] Lindsay shares what the experience of visiting a Yoga Six studio is like.

[20:38] While the roadmap provided by Xponential Fitness covers guidance for business processes, the experience at each brand is crafted internally.

[27:50] When Lindsay first started with Yoga Six, she assumed that the franchisees would be people who were involved in the yoga industry, however, she now looks for people with an entrepreneurial spirit and are able to overcome adversity.

[30:45] Currently Yoga Six has over fifty franchise locations and over 450 in the pipeline to be opened.

[34:49] Lindsay explains how they manage launching that many franchise locations in a short timeframe and also what type of support resources they have for their franchisees.

[37:36] With respect to COVID-19, Yoga Six has been offering virtual classes to keep business moving. Lindsay points out that a benefit of using Yoga Six is that you have access to virtual classes at all of their locations across the country, not just their local studio.

[40:12] If you want to learn more about Yoga Six, visit their website listed below.

[40:49] Thanks for listening, and please, reach out to Josh anytime through email at josh@franchiseeuphoria.com. If you enjoyed this interview, please leave us a review on iTunes.

PrevInnovating Your Franchise During COVID-19 with John Kutac of The Whimsy Cookie Company
Building Your Infrastructure with Franchising in Mind with Nicole Di Pietro of Jeremiah’s Italian IceNext
pardee2003 from United States

11/16/2019
Read More
Great and applicable information from professionals in the franchise world that are doing it every day. I’ve listened to 3 episodes: Gutter Brothers, Woofies, and Cycle Bar. Enjoyed all and looking forward to hearing more.
WTutor311 from United States

8/30/2019
Read More
Highly recommend. Great guests. Filled with tons of helpful information.
Katie Joy B. from United States

7/16/2019
Read More
Josh and his wide variety of knowledgeable guests are truly rockstars! They deliver quality (and free!) franchise knowledge and advice in each and every episode. The great advice they provide, combined with the engaging way they deliver it had me hooked from the very first listen. Thanks for putting out such a stellar show Josh - keep up the great work!
Jordan gross from United States

07/15/2019
Read More
This podcast provides the advice necessary to start building, growing, and scaling your business TODAY! The host asks probing questions of his guests that add value to the listeners in an immediately implementable way!
VPugliese from United States

07/15/2019
Read More
What do you get when you combine business savvy, legal expertice and a great personality? You get the ultimate podcast for franchise owners. Josh Brown brings it all togehter perfectly with Franchise Euphoria. Not only does he possess all of the skills and abiliites above, but he has great guests, asks awesome questions and created the ideal podcast for this niche. If you have a franchise, or are considering it, subscibe to this show and consume all of the content!
Mick James from United States

06/05/2019
Read More
Started listening to Josh's podcast after the wife and I decided to buy a franchise and I quickly went through about 200 episodes on 1.5x & 2x, before signing on to purchase a franchise. Josh's info was an invaluable part of our decision to buy, and after listening to so many episodes, I felt like I knew and trusted him on a personal level, so it was a no-brainer to enlist his services when it came time to review the franchise agreement. Josh was super easy to talk to and very empathetic to our needs, and being first time business owners, we needed all the empathy we could get. Josh helped us negotiate a great deal with the franchisor and we were very happy with his services. Great podcast, great guy, great service to anyone involved in the franchise world!
Dean575 from United States

06/04/2019
Read More
Very interesting discussion. I found the information valuable.
Summieysum from United States

05/06/2019
Read More
I've just completed the legal process of franchising my business and have now begun selling franchises. Just found this podcast and it's an incredible resource! Great content and Josh is a very engaging host. Highly recommend for franchisors and franchisees.
Previous
Next