From Pro Baseball Player to Multi-Unit Franchisee with Bobby Malek 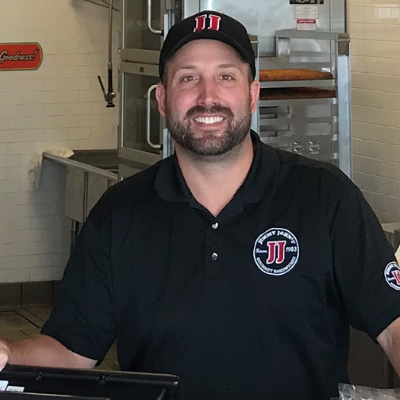 Bobby Malek is a multi-unit franchisee for Jimmy John’s. He currently owns four Jimmy John’s franchises in Florida and has another in development. Prior to opening his sandwich shops, Malek played professional baseball where he was a part of the New York Mets and Los Angeles Dodgers’ systems. Originally from Canton, MI, Malek was also a 3x All-American and Big Ten Baseball Player of the Year at Michigan State University. Malek and his wife Michelle have twin daughters, Harper and Riley.

[2:56] Bobby briefly goes through his history as a professional athlete, getting his start at Michigan State University then moving onto getting drafted by the New York Mets.

[4:04] Wanting to invest in his future as a businessman, Bobby reflected on his time in college when he would frequently eat at Jimmy John’s and decided he wanted to pursue them as a business venture.

[7:16] Bobby was really impressed with the recruitment process Jimmy John’s put on and felt that he had an extremely smooth transition from his playing career to an entrepreneur.

[8:07] The first two stores were opened by Bobby, the next two were purchased from existing franchisees, and now Bobby is looking at opening a fifth one. All of his stores are in Florida.

[10:32] Josh points out that you can draw on the same concept of having to communicate messages to your team in both baseball and franchising.

[12:46] For Bobby, adding the second location was a challenge, but it forced him to be prepared.

[16:22] As a multi-unit franchisee, there is no such thing as a “typical” day. But Bobby’s advice to the listeners is that you must be present in order to succeed.

[19:59] Bobby does his best to replicate the Jimmy John’s mantra of love, hugs, and smiles to propel the success of his locations.

[23:21] Thanks for listening, and please, reach out to Josh anytime through email at josh@franchiseeuphoria.com. If you enjoyed this interview, please leave us a review on iTunes.

PrevFranNet: A Franchise for Franchise Consulting, with Jania Bailey
Identifying and Infiltrating Gaps in the Market with Shred415 Co-Founders, Bonnie Micheli and Tracy RoemerNext
pardee2003 from United States

11/16/2019
Read More
Great and applicable information from professionals in the franchise world that are doing it every day. I’ve listened to 3 episodes: Gutter Brothers, Woofies, and Cycle Bar. Enjoyed all and looking forward to hearing more.
WTutor311 from United States

8/30/2019
Read More
Highly recommend. Great guests. Filled with tons of helpful information.
Katie Joy B. from United States

7/16/2019
Read More
Josh and his wide variety of knowledgeable guests are truly rockstars! They deliver quality (and free!) franchise knowledge and advice in each and every episode. The great advice they provide, combined with the engaging way they deliver it had me hooked from the very first listen. Thanks for putting out such a stellar show Josh - keep up the great work!
Jordan gross from United States

07/15/2019
Read More
This podcast provides the advice necessary to start building, growing, and scaling your business TODAY! The host asks probing questions of his guests that add value to the listeners in an immediately implementable way!
VPugliese from United States

07/15/2019
Read More
What do you get when you combine business savvy, legal expertice and a great personality? You get the ultimate podcast for franchise owners. Josh Brown brings it all togehter perfectly with Franchise Euphoria. Not only does he possess all of the skills and abiliites above, but he has great guests, asks awesome questions and created the ideal podcast for this niche. If you have a franchise, or are considering it, subscibe to this show and consume all of the content!
Mick James from United States

06/05/2019
Read More
Started listening to Josh's podcast after the wife and I decided to buy a franchise and I quickly went through about 200 episodes on 1.5x & 2x, before signing on to purchase a franchise. Josh's info was an invaluable part of our decision to buy, and after listening to so many episodes, I felt like I knew and trusted him on a personal level, so it was a no-brainer to enlist his services when it came time to review the franchise agreement. Josh was super easy to talk to and very empathetic to our needs, and being first time business owners, we needed all the empathy we could get. Josh helped us negotiate a great deal with the franchisor and we were very happy with his services. Great podcast, great guy, great service to anyone involved in the franchise world!
Dean575 from United States

06/04/2019
Read More
Very interesting discussion. I found the information valuable.
Summieysum from United States

05/06/2019
Read More
I've just completed the legal process of franchising my business and have now begun selling franchises. Just found this podcast and it's an incredible resource! Great content and Josh is a very engaging host. Highly recommend for franchisors and franchisees.
Previous
Next