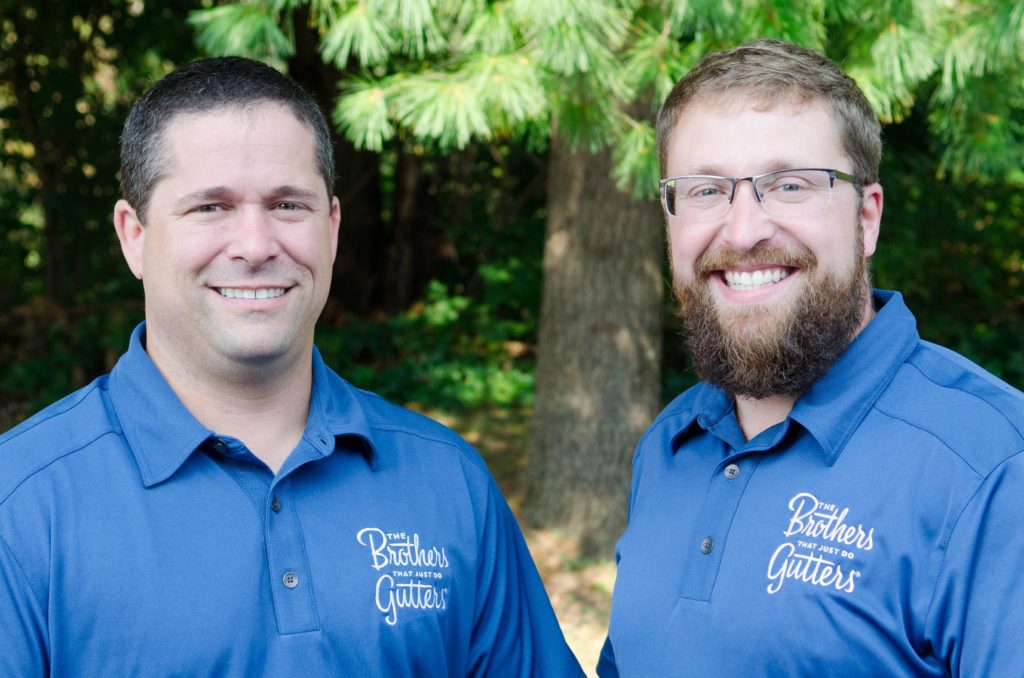 Ken graduated college with a History degree in 1996 and began teaching shortly after. Ken kept busy in the summer working as a gutter installer for a local company. By the end of the season he became inspired to learn the gutter trade and start his own business. In 1999, Ken essentially threw his degree into the gutter and started the company that would later by called “The Brothers that just do Gutters”. By 2002, the business had achieved great success. Ken realized he needed a partner to take his operation to the next level. Who better to fill this role than his own brother, Ryan Parsons?

Ryan had just finished earning his degree when Ken began recruiting him to join the gutter trade. After working two years for a start-up as a graphic designer, Ryan agreed to team up with his big brother temporarily while searching for a new job. During this time, he came to share Ken’s vision and by 2004 he was co-owner of business. Ryan now holds the titles of both Co-Owner and Chief Solutionist©.

[1:33] Ken gives a brief overview of what led this duo to start their own gutters franchise.

[6:02] Initially Ken and Ryan were getting inquiries from clients about doing more than just gutters in their services, but they explain why this decision ultimately didn’t pan out in the end.

[9:00] A lot of the reason for Ken and Ryan’s “re-focus” had to do with the education they were receiving at the time. While they were interested in learning other trades, they were learning a lot about different business principles which encouraged them to select an industry of expertise they could focus on.

[11:58] Brothers Gutters focuses on both residential and commercial clients.

[14:33] The advantage Brothers Gutters has over someone who generally does housing work is that the level of expertise and care is unmatched.

[17:44] The ideal Brothers Gutter franchisee is someone who is in the gutter industry but they’re having problems systematizing and scaling their business.

[21:10] Ken touches on what it took to get them to a “passive” business where they can focus on other aspects of operations such as coaching the leaders they have hired to run the business.

[22:42] Ken and Ryan knew they wanted to franchise this business back in 2007 and then spent until 2014 crafting their model and perfecting the systems to make it a business that will run itself.

[28:31] If you want to learn more about Brothers Gutters, you can visit www.brothersfranchise.com.

[29:08] Thanks for listening, and please, reach out to Josh anytime through email at josh@franchiseeuphoria.com. If you enjoyed this interview, please leave us a review on iTunes.

PrevLeading Your Industry with Mark Van Wye of Zoom Room
Managing Your Assets with Brett Swarts of Capital Gains Tax SolutionsNext
pardee2003 from United States

11/16/2019
Read More
Great and applicable information from professionals in the franchise world that are doing it every day. I’ve listened to 3 episodes: Gutter Brothers, Woofies, and Cycle Bar. Enjoyed all and looking forward to hearing more.
WTutor311 from United States

8/30/2019
Read More
Highly recommend. Great guests. Filled with tons of helpful information.
Katie Joy B. from United States

7/16/2019
Read More
Josh and his wide variety of knowledgeable guests are truly rockstars! They deliver quality (and free!) franchise knowledge and advice in each and every episode. The great advice they provide, combined with the engaging way they deliver it had me hooked from the very first listen. Thanks for putting out such a stellar show Josh - keep up the great work!
Jordan gross from United States

07/15/2019
Read More
This podcast provides the advice necessary to start building, growing, and scaling your business TODAY! The host asks probing questions of his guests that add value to the listeners in an immediately implementable way!
VPugliese from United States

07/15/2019
Read More
What do you get when you combine business savvy, legal expertice and a great personality? You get the ultimate podcast for franchise owners. Josh Brown brings it all togehter perfectly with Franchise Euphoria. Not only does he possess all of the skills and abiliites above, but he has great guests, asks awesome questions and created the ideal podcast for this niche. If you have a franchise, or are considering it, subscibe to this show and consume all of the content!
Mick James from United States

06/05/2019
Read More
Started listening to Josh's podcast after the wife and I decided to buy a franchise and I quickly went through about 200 episodes on 1.5x & 2x, before signing on to purchase a franchise. Josh's info was an invaluable part of our decision to buy, and after listening to so many episodes, I felt like I knew and trusted him on a personal level, so it was a no-brainer to enlist his services when it came time to review the franchise agreement. Josh was super easy to talk to and very empathetic to our needs, and being first time business owners, we needed all the empathy we could get. Josh helped us negotiate a great deal with the franchisor and we were very happy with his services. Great podcast, great guy, great service to anyone involved in the franchise world!
Dean575 from United States

06/04/2019
Read More
Very interesting discussion. I found the information valuable.
Summieysum from United States

05/06/2019
Read More
I've just completed the legal process of franchising my business and have now begun selling franchises. Just found this podcast and it's an incredible resource! Great content and Josh is a very engaging host. Highly recommend for franchisors and franchisees.
Previous
Next