Decoding the Franchise Disclosure Document From A to Z – Item #12 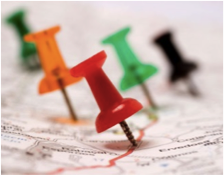 Item #12 of the Franchise Disclosure Document covers the nature of assigned territories – if any.

• The franchises territory philosophy, including:

After reading Item #12, you should not only understand the franchises policies on territory, but also be able to pinpoint whether or not you agree with it.

Why is this important?

Clearly, we have two opposing philosophies here. What it really boils down to is making sure that the franchisor’s territory philosophy fits with the business, itself, and that you personally agree with the procedure and believe that it will serve your business interests.

For example, let’s say that you’re considering the purchase of a franchise that sells pizza and, because of the high number of competitors in the area you would prefer to have a protected territory. You feel that competition is fierce enough as it is and it would be undesirable to have two franchisees under the same company vying for the already congested market. However, while reading through the FDD, you find that the franchise doesn’t offers very small territories – in fact, their philosophy is to bunch the franchise locations together in pockets of 8-10.

If this immediately makes you uncomfortable, then you need to speak with the franchise executives about why they definte their territories in that way. They will either surprise you and have a very good explanation for it– or, they’ll confirm your worst fears and it may be time to consider a different franchise model. After all, if you’re not happy and comfortable with your location and territory, DON’T BUY THE FRANCHISE.

Additionally, watch out for retail franchises that don’t offer any territory protection at all. Retail stores generally perform poorly if they’re stationed too close together, so this could be a red flag that something is amiss or that they don’t have a good handle on their own marketing strategy. Also beware of territory policies that are inconsistent or vague. If the FDD is not clear on this issue, make sure the Franchise Agreement is BEFORE you sign.

Finally, it’s essential to note that your territory will only be protected for the life of the franchise agreement. Once that agreement expires, the franchise has the discretion to change the rules, adjust territories and switch things up whether you like it or not! See Items #10 and #11 for more information about the franchises obligations to you, as a franchisee.

The bottom line is that #12 should educate you on what the geographical territory looks like, how well it’s protected, and what you can and cannot do with it.

Next week you’ll learn about the franchises intellectual property in Item #13.